(Soon to be aboard) R/V Hugh R. Sharp

Last summer I served as the Commander for our simulated mission during my week-long adventure at Space Camp.

Hello, my name is Carol Glor and I live in Liverpool, New York (a suburb of Syracuse). I teach Home & Career Skills at Camillus Middle School and West Genesee Middle School in Camillus, New York. Last summer, I was selected to participate in Honeywell’s Educators at Space Academy at the US Space and Rocket Center in Huntsville, Alabama. It was a week-long camp full of activities that use space to become more effective educators within science, technology, engineering and math. When one of my space camp teammates told me about her experiences as a Teacher at Sea, I knew that I had to apply.

I am so excited to have been chosen by NOAA (National Oceanic and Atmospheric Administration) to be part of the 2014 Teacher at Sea field season. As a Home & Career Skills teacher, I have the opportunity to educate students about the connections between real-life skills in math, science, technology and engineering while learning about important topics such as conservation, career exploration and current events. The best way that I can learn to teach these skills is by practicing them myself. During my upcoming cruise, I will become a real scientist and learn more about the scientific research that is involved in keeping our oceans alive for generations to come. 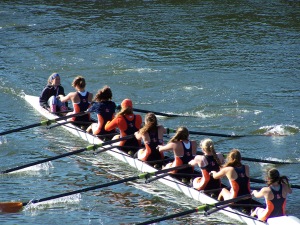 Sustainability is an important topic of concern for our oceans as well as our lakes and streams. I currently live less than a mile from Onondaga Lake. For many years it has been considered one of the most polluted bodies of water in the US. Since 2007, the Honeywell Corporation has implemented the Onondaga Lake Remediation Plan (slated for completion in 2015) to result in an eventual recovery of the lake’s habitat for fish and wildlife as well as recreational activities on and around the lake. Most recently, the West Shore Trail Extension was opened for the public to enjoy. Onondaga Lake Park has always been one of my favorite places to go to experience nature while walking, running, biking or watching my daughters’ crew races. Now I can enjoy it even more.

I will be sailing from Woods Hole, Massachusetts aboard the R/V Hugh R. Sharp to participate in an Atlantic sea scallop survey. The R/V Hugh R. Sharp is a coastal research vessel, built in 2006, is 146 feet long, and is part of the University of Delaware’s College of Earth, Ocean, and Environment fleet. 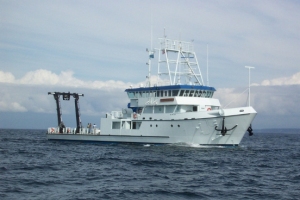 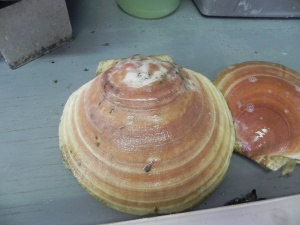 What I hope to learn:

Recently, I had the pleasure of visiting Martha’s Vineyard, Massachusetts. While there, I experienced the beauty of the coastal island as well as savoring the bounty from the sea. As a casual observer, I noticed a few lobster boats, trawling vessels and pleasure cruisers. Each has a stake in the future abundance of sea life in the Northwest Atlantic Ocean. I would like to learn first-hand the impact of over-harvesting on sea scallops and be able to observe them in their natural habitat. My work as a scientist will give my students a taste for the vast amount of research careers that are available to them. 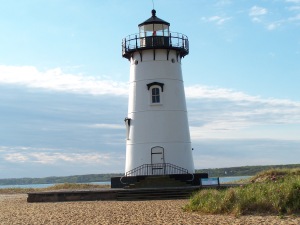 A Lobsterman hauling in his catch in Nantucket Sound.