Getting ready to lower the CTD 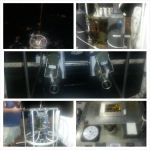 The Oregon II carries an instrument called a CTD (Conductivity, Temperature, Depth) that is lowered into the ocean by a crane. On the bottom of the CTD are sensors that detect and relay information back to a computer onboard the Oregon II. On top of the sensors are Niskin (gray) bottles that are manually opened before the CTD is lowered into the water, and are tripped by the Watchleader (closing and trapping water inside) when it reaches the desired depth. Data from the CTD is sent to the ship where it is recorded and stored. After the CTD is back on board, the water from the Niskin bottles is used to check the amount of dissolved oxygen. This data is then combined with numerous stations/stops and used to create a real time map of the dissolved oxygen levels in the Gulf of Mexico.

If you can imagine living at the top of Mt. Everest without an oxygen tank, that is what living in hypoxia would be like to a fish.  While the majority of organisms cannot survive in a dead zone, those organisms that do survive have been found to have permanent changes in their reproductive systems, such as smaller ovaries and fewer eggs in female fish. Dead zones in the Gulf of Mexico are due to runoff from Nitrates and Phosphates that come from fertilizers, detergents and human/animal waste. Because of hypoxia, phosphate detergents have been banned in the Great Lakes and you may even notice that some of your household detergents say “phosphate free”.

Overall I’m pretty exhausted both mentally and physically. While I have taught my Environmental Students about some of the things I am doing, it’s my first time putting these into practice myself. Although I am grateful for the experience, it is a bit much to take it all in and I feel slightly overwhelmed. Luckily, I will have the chance to perform these tasks over and over before the Oregon II returns to shore. And more importantly, I am working with an amazing team of scientists who are happy to answer all of my questions and walk me through procedures multiple times.

I’m slowly adjusting to being in a different time zone, but am definitely feeling the time change. I am on the night shift which means I start work at midnight and finish at noon. This is unusual for me since I like to be in bed by ten every night. On the bright side, my night shift means I get to beat the heat during the middle of the day when the temperatures are in the eighties.

Finally in my Survival Suit

Yesterday we had an emergency abandon ship drill where we had to don survival suits. You put them on as though you were getting into a sleeping bag. This meant a lot of rolling around on the floor for me, but I like to think I entertained the crew while I was doing it. My dad thinks I look like Sebastian from the Little Mermaid in my suit, but I’m confident that I will be a warm lobster until rescue arrives in the unlikely event I have to abandon ship.