Weather Data from the Bridge
Weather System: highly variable in the Bering Sea
Barometer: falling on the second day
Wind: Ranging from light and variable to 35 kts
Low Temperature: 7.0º C
Sea State: initially <1-2 feet up to 8 feet on the evening of the 29th 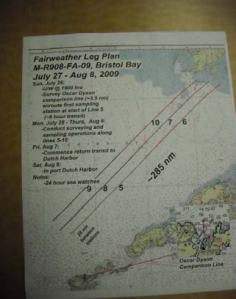 The sheet above shows legs 5-10 of FISHPAC in the Bering Sea, AK

The Magnusen-Stevens Fisheries Conservation Management Act includes the broad designation of “Essential Fish Habitat” (EFH) as including myriad parameters which are to be considered for all life stages of the managed species. Included in them are bottom type, epifauna and infauna, grain size, and organic debris. Additionally, studies are to span the life cycles of those species.  There is an enormous amount of historical data relating to commercial fisheries catches, but the data have not been assembled as a whole and screened for accuracy.  Additionally, there has been virtually no search for correlations within the data. Dr. Bob McConnaughey is engaged in seeking correlations between bottom characteristics, managed species and sorting through extant records in the search for utilizing sonar data to anticipate species presence in the Bering Sea.  The phrase I’ve heard is “using bottom characteristics as proxy for prey identification.” Earlier cruise results can be viewed here.  It would take a long time to describe all that they do at the Alaska Fisheries Service Center, so what I highly recommend is that you spend a while at their site. 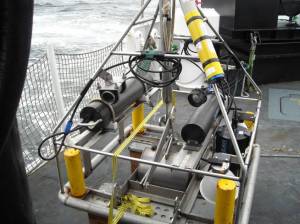 In addition to searching for correlations between trawl catch data and bottom characteristics, Dr. McConnaughey and his team are trying to determine if sound data (Multi-beam Echo Sounders and Side Scan Sonar) can be used in anticipating what species will likely be present in a given area. There are 69 managed commercial species in Alaska alone, which represent an enormous proportion of the commercial US catch, and if technology and research can be gained here, it can conceivably be applied elsewhere.  The Alaskan fisheries have also not been subjected to as much commercial fishing as, say, the coast of New England due to the remote, harsh and generally newly populated area which is Alaska. Commercial fishing here is, for the most part, less than 50 years old compared to the hundreds of years off the East Coast.

SeaBoss being deployed. It is suspended from the J-Frame and swung outboard. Tending the SeaBoss can be hazardous so crew members are tethered to the deck.

Alaska has over 45,000 miles of coastline, contains 70% of the United States continental shelf, and 28% of the Exclusive Economic Zone (a 200 mile legal designation) yet much of that area has never been properly surveyed. With the prospect of a warming climate and potential northerly relocation of commercially viable species, it is essential to document as much of this area as possible before long-term damage may be inflicted on it. In order to evaluate the EFH parameters, one of the tools the FISHPAC team uses to gather bottom samples is an apparatus called the SeaBoss (Sea Bed Observation System.)

SeaBoss allows the team to gather a 0.1m2 bottom sample, descending and forward looking video and still pictures taken just before it hits the bottom. SeaBoss gets deployed twice at each site.  The first sample is brought up and dumped into a sieve with a 1mm grid size.  It is then gently hosed off with seawater to clear away the inorganic materials and large particles.  The remaining biomass is put into containers with formalin solution for 2 days and then put into an alcohol solution to prevent decay.  Those samples will be quantified back in the lab in the Seattle area. With the second sample from roughly the same bottom area, samples are taken of the bottom material itself from the surface and from a couple of centimeters below the surface.  These, too, will be quantitatively evaluated back in the lab for grain sizes present and the proportions of those grain sizes in the sample. For background information on the SeaBoss, go here.

Before we left Dutch Harbor, we took on fuel (about ¼ of a load – only 22,000 gallons!) We took on ship’s stores (food.) 100+ gallons milk, 25 cases produce, a couple hundred pounds of meat (beef, chicken, pork, lamb,) scores of loaves of bread, and numerous cases of ice cream as well as other things.  It took several hours to stow it all away.  We also took on about 10 pallets of scientific gear for the FISHPAC team.  One of the more interesting scenes was watching AB Jim Bush rigging the A-Frame for deploying some of the equipment off of the fantail.

Questions for You to Investigate

Check out the web sites I listed, there’s some really cool stuff on them.