We had a slight lull in the sampling yesterday due to storms and lightning risk, but today has been full speed ahead with the trawling. In this blog I’ll talk more about taking data and how the data and samples are used.

We use the FSCS system, designed by NOAA, to record our data for each trawl. The program walks us through all the data need for each species. The pattern goes something like this: select species, measure length with the Limnoterra magnetic measuring board, then mass the individual, and finally try to determine the sex of the organism. Without this technology I can image that the whole sampling process would take a lot longer. 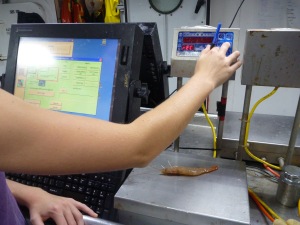 Mass and sex the species

Determining sex can be tricky at times and there are some species that we cannot sex such as squid, scallops and very small fish. We cut the fish open and look for male and female gonads. If possible we also mark the maturity state of the individual. 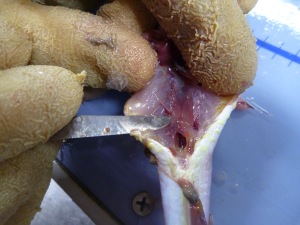 When recording shrimp, we measure length, weight and sex for each individual up to 200. This can take a while, but working in pairs we get pretty efficient. Female shrimp have a circular breast plate, called a thelycus, under the head or just above their first set of legs. Males have a petasma, the male sex organ, between their two front legs. 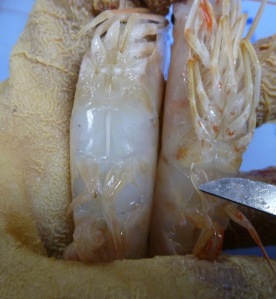 David (left) and Tyler work together to measure, weigh and sex the shrimp efficiently

You might be wondering what happens to all this data that we are collecting?

The data we collect is sent to SEAMAP (Southeast Area Monitoring and Assessment Program) and is made publicly available. Scientists can use this data for their research. The SEAMAP Groundfish survey happens twice per year and has been ongoing for 42 years, allowing for identification of long term trends in the data.

SEAMAP gives the shrimp data to the different state agencies who make the data available to fishermen, who will use it to determine if shrimp are of marketable size and thus worth heading out to shrimp.

In addition to the data we are collecting, we also collect and freeze samples. Any scientists can make requests for a study species to be saved from our trawls. These requests are entered into the computer system, which prompts us to bag, label and freeze the species to be taken off the ship at the end of the cruise.

Samples stored in the freezer. There are many more in additional freezers.

For example, we save all Red Snapper and send them to the NOAA lab in Panama City, Florida, for an age and growth study. Red Snapper is the top commercial fish in Gulf of Mexico, so this is critical data for fisherman and sustaining a healthy fish stock.

Several of the students who are part of the science team are collecting samples for their research. 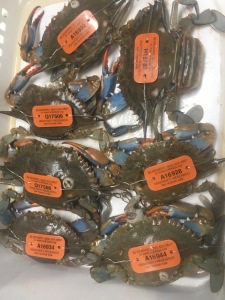 Helen, who is part of the night shift, attends University of Southern Mississippi and is part of the Gulf Coast Research Lab. She is part of a team that is looking at migration patterns and reproductive behavior of female Blue Crabs (Callinectes sapidus). She tags female crabs and if fishermen find them they call in to report the location. Female Blue Crabs mate after their terminal molt and collect sperm in sac-like receptacles to use later to fertilize their eggs. When ready to spawn, the females move lower in the estuary into saltier waters. Blue Crabs are the most common edible crab so it is important to continue to monitor the health of the population in the Gulf. 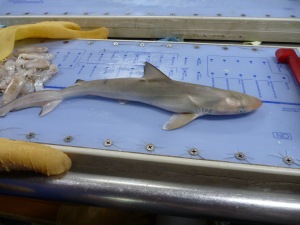 Sharpnose Shark ready to be measured

David is an undergrad at University of Miami, who has earned a scholarship through NOAA Office of Education school scholarship program. As part of this program, he is funded to do summer research. He is working as part of larger study looking at the distribution and diet of the sharpnose shark (Rhizoprionodon terraenovae), one of the most common species of shark in the Gulf. Sharpnose sharks are generalists and the research study is looking to see if they are also potentially opportunistic eaters. He is also comparing diets from East and West Gulf sharks and may also be able to compare diets of sharks in low vs high oxygen areas. David’s data collection involves sorting through partially digested stomach remains to try to figure out what the shark ate; he gets to play detective in the lab.

Tyler is a graduate student at Texas A&M at Corpus Christi and works with Atlantic Croaker (Micropogonias undulatus). He researches whether exposure to low oxygen affects what Croaker eat. Croaker are widely abundant in the Gulf–they often make up more than half of our trawl samples–thus they make a good study species. Croaker often feed at the bottom, in the benthic zone. Tyler is trying to determine if Croaker are changing their feeding patterns in hypoxic areas by feeding higher up in the water column in the pelagic zone to find more food. He uses Croaker tissue samples to examine diet using isotopes. The general idea with isotopes is that what you eat or process will become part of you. Different prey species will have different isotope signatures and looking at Croaker tissue can determine what organisms the fish have been eating.

As you can see the data and samples from this survey support a lot of science and sustainable fisheries management. Check out some of the interesting organisms we have found in our trawls in the last few days. 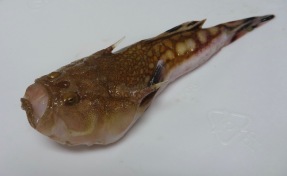 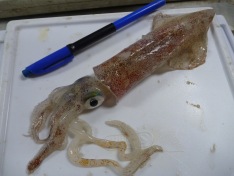 As we crank through trawl after trawl of species, I have to stop and remind myself of where I am. As a land lover, it can be a little disconcerting that there is no land anywhere in sight. This fact is helping me appreciate the vastness of the ocean. It is said that we have only explored five percent of the ocean. Before I was on the Oregon II, this was hard to believe, but now I am starting to comprehend just how large the ocean really is.

Sunset over the Gulf of Mexico

Andre and the Cobia

We had some rough seas due to a storm cell a couple days ago which got the boat rocking and rolling again. The movement made it hard to sleep or move around. Luckily, we are through that area and back to our normal motion. With each trawl, I anticipate the possibility of interesting new species that might come up in our net. We caught an 18.8 kg Cobia (Rachycentron canadum) in our net yesterday, which is a fish I had never heard of, but is apparently prized as a food and game fish. Andre filleted it up and we ate it for lunch. It was so of the best fish I’ve ever tasted. Living in Colorado, I don’t eat much seafood, but I’ve decided to try what we catch out here and I’m glad I have. We’ve also had fresh caught shrimp and snapper that were delicious thanks to Valerie and Arlene, the stewards who are keeping us well fed.

I’m enjoying getting to know some of the folks who work on the ship. Many of these people have worked on the Oregon II for several years. When you live and work with each other in a confined space for 24 hours a day, you become close pretty quickly. The family feel among the crew and officers is evident.

I am getting more efficient with my measuring and weighing techniques and even remembering a few scientific names. During each twelve-hour shift, the time spent on our feet depends on the number of stations we cover. Some days we are back to back, just finishing up one sample while they are already trawling for the next. A monitor screen tells us the distance to the next station, so we can anticipate what is coming next. We are getting closer to the Mississippi delta where we are anticipating a decrease in oxygen at some of our stations.

The Natural Marine Sanctuary System is a network of underwater parks that protects more than 600,000 square miles of marine and Great Lakes waters. NOAA’s Office of National Marine Sanctuaries serves as the trustee for the parks and brings together a diverse group of stakeholders to promote responsible and sustainable ocean use and protect the health of our most valuable ocean resources. Healthy oceans can provide recreation and tourism opportunities for coastal communities. (Source: sanctuaries.noaa.gov)

In the Gulf of Mexico there is a marine sanctuary called Flower Garden Banks which includes three different areas, East Flower Banks, West Flower Banks and Stetson Bank, which are all salt dome formations where coral reef communities have formed. You can learn more about our National Marine Sanctuary System here.

Why do you need to take the temperature and amount of salt in the water? (Bella)

Temperature, salinity, dissolved oxygen and florescence measurements give us more information about the water where we are sampling. Salinity helps tell us if we are in a freshwater, estuary or fully marine environment. The salinity will decrease as we near the Mississippi river delta. Salinity and temperature affect fish physiology or body functions. Each species has normal tolerance levels that it can live within. Organisms that find themselves outside of their salinity and temperature limits might not be able to survive.

The image of the CTD data below gives you an idea of typical values for temperature, salinity, dissolved oxygen and florescence and how they change as depth increases.

Does the temperature of the ocean get colder as it gets deeper? (Allison)

How deep is it where you have sample? (David, Shane, Alix)

We sample at depths of 5-60 fathoms. One fathom equals 6 feet.